Max R. Hackney, described as a "man who was born to rock the boat," died on May 9, 2016 in Arcadia at the age of 59.
Max was born in Washington, N.C. on July 16, 1956. He resettled to Arcadia, Fla. in 1964 with his two brothers, sister, and parents. His young life was dealt a blow when his father Bill Hackney, Sr. died of cancer in 1970.
However, Max bounced back to graduate from high school and begin his pursuit of a college degree. After a short stop at St. Petersburg Junior College, Max went on the University of Florida, where he pursued a degree in journalism, which was his father's chosen profession. This, in many ways, was the golden era of journalism and Max was in the center of it as photo editor at the Independent Florida Alligator, the student-run newspaper.
Max earned his degree in 1977, and went on to work for his home-town newspaper, The Arcadian, and then as a staff writer at the Tampa Tribune.
He left the journalism field in the early 1980s and began working for the state of Florida at one of six state-funded mental hospitals - G. Pierce Wood Memorial Hospital - ultimately becoming a Unit Director of a unit that housed those patients that were among the most mentally ill. When G. Pierce Wood Memorial was closed by the state, Max continued working for the state as a Software Development Business Analyst at Florida Department of Education. He was an advocate for abused children in his work for the state
Upon retirement in 2014, Max moved back home to Arcadia, where he enjoyed the company of his many childhood friends and family and tended to the yard of his home. Even so, Max's camera was rarely more than arm's length away.
In the wake of his passing, many have come forward with testimonials to his special presence in this world.
"Some people are truly singular, and my Uncle Max was one of them: puckish, cantankerous, smart as all get-out, and - as Warren Zevon would say - born to rock the boat," said one of his nieces. "I'm a better person for everything he taught me about how to engage with life's big questions without taking things too seriously (not to mention all the photography advice)."
One of the people that reported to him at G. Pierce Wood added that Max was "one of the best supervisors I ever had. The best surprise ever came on Secretary's Day when he presented me with fresh steamed shrimp wrapped in newspaper straight from the market. Max was always thoughtful like that."
And finally this from one of his college friends, who remained close to him over the ensuing decades: "I knew I'd met a kindred spirit when I met Max. I found him to be smart, funny, charming, curious and upbeat--really just a peach of a guy. He was contagious. ... I miss Max. He made me feel good when I was around him."
Max, who experienced extraordinary physical pain in the last weeks of his life, was preceded in his passing by his parents, Bill Sr. and Catherine Hackney. He is survived by his daughters, Mary Margaret (Daniel) Moore of Wauchula, and Caroline Hackney of Tallahassee; and two grandchildren, Harper Kate Moore and Dean R. Moore. He also leaves behind a sister, Catherine, and two brothers, Bill Jr. and Holt.
The family has invited his friends to join them for an informal remembrance of Max's life at 7 pm on Saturday, May 21, at the home of Bill and Debbie Hackney at 504 East Oak Street in Arcadia. In lieu of flowers, they ask that you consider the George R. Smith Scholarship Fund at the University of Florida Foundation. Since 1988, the fund has awarded over $45,000 in scholarships to DeSoto High students who attend UF.

Walter L. Gilchrist
Rest in peace Max, you will be miss

Your Open Road family misses you!!!

My sincere condolences to the family. Max was a very special man. I will cherish my memories of him.

Max was a rare diamond.It was a pleasure to have known him 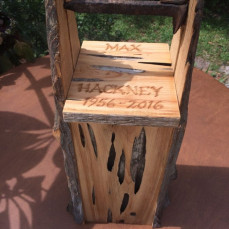 The attached photos are added to the memorial of Max R. Hackney to help share their legacy.

Thank you for sharing your memory of Max