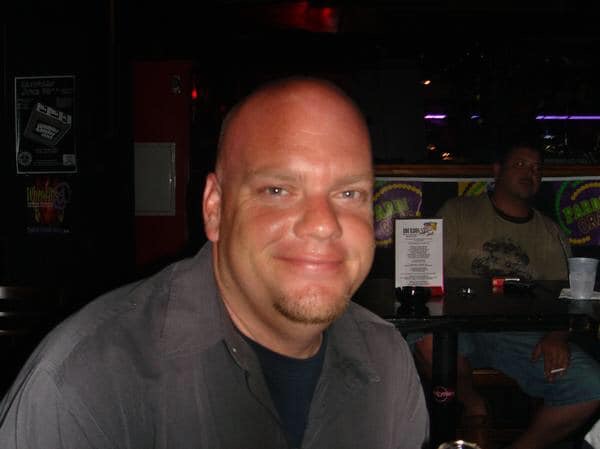 Joel was born in Peoria, IL to Jan Fredrickson and Melody Badgerow on December 4, 1972.

He was a sales manager for Kirby for several years, which allowed him to live in many states and cities. New Orleans, LA was one of his favorites and where he became a devoted Saints fan. Cigars became a hobby and then a passion. He joined a group of cigar enthusiasts and they traded cigars between members from around the world. He had so many friends who all would comment on Joel's sweet, gentle caring nature and quick wit. He held everyone close to his heart, especially his family.

Joel loved children and had two favorite charities, St. Jude and Make a Wish Foundation. He would feel so honored for donations to be made in his name.

I am so sorry for your loss. These words bring me peace--maybe at some point in your grieving they will do the same for you. Love and peace to you, Sandy Kramer Henderson

Death is so final. It is hard letting our loved ones go. “We have always held to the hope, the belief, the conviction that there is a better life, a better world, beyond the horizon.” Joel has soared over the horizon and he is living the better life. One day, one day, we will all gather and soar over the horizon. So, sweet, sweet Melody and Heidi and Molly, this is your hope, our hope. We live and believe it to be true. Joel fought the good fight here on earth, while loving and serving his family and friends. Now his reward is realized. He has no more pain. How lucky the family was to have had Joel…I know the pain of loosing a brother. Sadness engulfs me even as time passes. It will for all of you as well. May God be with you all. May God give you all comfort and peace. May He give you all the memories to sustain you each, as He has done for me and others.
Love, Your cousin, Pamela Badgerow Adams and Normer Adams.

Melody, Heidi, and Molly I know how losing Joel has left an empty spot in your heart that can never be filled. My heartfelt condolences go out to you. I pray for your peace of mind. Talk about Joel often and celebrate his humor. ❤️❤️

Our deepest condolences to the Fredrickson family and friends from Kay Waites and staff at Sound Choice Cremation & Burials.

The services for Joel have not yet been added. Please sign up below to be notified when the services are ready.

The attached photos are added to the memorial of Joel Ryan Fredrickson to help share their legacy.

Thank you for sharing your memory of Joel