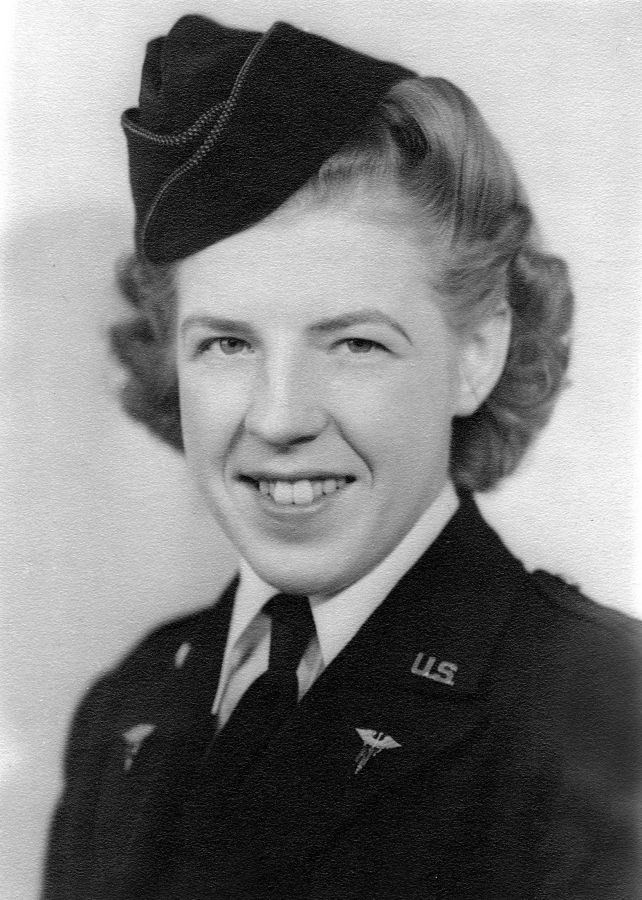 Adeline was born in Aurora, IL to Frank and Anna (Viatkus) Zabor on April 25, 1921. Adeline graduated from Madonna High School in Aurora, IL in 1938, where she was awarded the Bausch & Lomb Honorary Science Award. Adeline then entered nurses training at the St. Charles Hospital School of Nursing, in Aurora, IL, where she graduated with her RN in February 1942. Enlisting in the Army Nurse Corps in September 1942, she embarked for Bizerte, Tunsia, North Africa in September 1943 and was then re-assigned in December of that same year to Italy where she served the 304th bomb wing of the 15th Air Force, in the 34th field hospital in Cerignola, Italy and later to detached service to Spinazzola, Italy. Adeline was discharged in 1946 as a 1st Lt. She is registered in the Women in Military Service for America Memorial in Washington DC.

After the war, Adeline worked as a nurse at St. Charles Hospital in Aurora and over 30 years for Dr. Fritz Hengge in Downers Grove, IL. She married John W. Hennessy, also a WW II veteran and patient under her care, in 1948 and had two children, Michael and Janet. Adeline was a devoted wife, mother, and grandmother. A highlight of her life was an honor flight to Washington DC for the dedication of the WW II memorial in 2004, sponsored by the Vietnam Vets of DeKalb County, IL.

A memorial service will be held at Sound Choice Cremation and Burials, Bradenton, FL on December 14, 2019 from 3 to 6pm. Burial will occur at a later date at the Clarendon Hills cemetery in Darien, IL. Memorial donations may be made to the Women's Memorial in Washington DC in her memory at https://www.womensmemorial.org/. Notifications can be directed to janetkholt315@gmail.com. The family would like to thank Poet's Walk staff and Tidewell Hospice staff, both of Sarasota, FL, for their valuable support in mom's time of need.

Adeline lived her life fully, with an adventuresome spirit and much love and kindness to her family and friends. Her memory inspires us to live our lives honestly and humbly, with heart, humor, and zest for life.

I remember as a child going to visit Aunt Addy. She was always warm and loving to everyone. It was a;lso an escape as on only child with one parent who was an alcoholic. I felt safe and relaxed for those times I spent with her and my older cosin Mike and later Jan. She treated me like I was one of the family. Only later did I find out what experiance she had during the war.I will always remember her for her keen wit and loving heat.

I have so many wonderful memories of mom, she was hard-working, caring and strong at the same time, the neighborhood cookie baker, an impeccable house cleaner, a healer, and a fun mom. One memory that illustrates her spirit, was when she traveled with me to college to help me find an apartment. We tent camped at Giant City Park in Carbondale, IL. The next day, as we were shopping she taped (with band-aids of course) a sign on my back. "Looking for a roommate, inquire on reverse side".

The attached photos are added to the memorial of Adeline (Adie) V. Hennessy to help share their legacy.

Thank you for sharing your memory of Adeline (Adie)