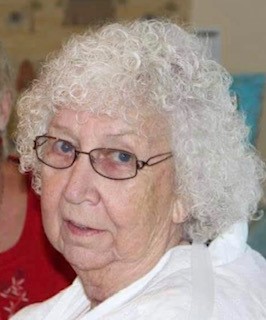 Reba Mae Johnson Calvert passed away on Friday, August 21, 2020.
Devoted wife of Arthur. Beloved mother of Judith, Robert (Mely), Karen (George), and Carolyn (Doug).
Cherished Grandmother of Tara (Calum), Junior, Thomas, Kevin, and Lauren. Adored Great-Grandmother of Jaxson and Maddox. She is survived by her brother Hubert and many nieces and nephews. Predeceased by her sisters Dorothy and Ruth.
Reba was born on October 22, 1935 in Camden, TN. She moved to Chicago when she was 17 years old where she worked as a waitress. She met Arthur and they were married on November 7, 1959. They welcomed their first daughter Judith in 1960. They moved to Brooklyn, NY two years later where they were blessed with a son, Robert. They moved to Hicksville, Long Island, NY where they had another daughter, Karen and three years later, a third daughter Carolyn.
Reba was a devoted mother to her 4 children. She also worked as a hairdresser during those early years. She was an avid and accomplished bowler and would win many bowling championships. She later would take up archery and competed in many tournaments including the Empire State Games. Many life-long friends were made during those years.
In 1988 Reba and Art moved to Englewood FL. and would work for the Kings Insurance agency and spent many years helping her neighbors with all their insurance needs. She took great pride in her job.
Reba enjoyed boating and camping. Reba and Art would make annual trips out west visiting many of the wonders of our great nation.
In 2008 she moved back to her hometown of Camden TN. She would enjoy a quiet life of family and church and had a large working garden. Reba would grow and can many vegetables that she would share with her community.

Reba would move back to Florida this time they settled in North Port. Reba would enjoy her remaining years devoting herself to her family and church. She was a woman of great spiritual fortitude.
When you look back on someone's time on earth you tend to speak of their spouses, children, grandchildren, and great grandchildren that they left behind...but Reba would not want to be remembered in that way. She would want us to speak to her character, her unwavering devotion to her faith and the fact that she never met a stranger who did not turn into a friend. The cups of coffee shared over stories of times past and times to come, the hugs that she never seemed to run short on, or the way no matter what was in her fridge she could feed anyone who came to her home. Those acts of kindness which, to her, were just how she lived each day are how she would want to be remembered. It is not often you find a woman like Reba, as selfless, fearless, courageous, and loved as anyone could be. She loved her family and friends without question, hesitation, or limit...she will be missed more than any words could ever express. Reba was a loving mother and devoted wife that would never end a conversation without saying "I love you". She always said that if anything happened to her, she wanted you to remember that the last thing she told you was how much she loved you and to that we say......we will always love you!
No memorial service is planned at this time due to COVID restrictions, although a celebration of life will be held when restrictions are lifted.

Revelation 14:13
And I heard a voice from heaven saying unto me, Write, Blessed are the dead which die in the Lord from henceforth: Yea, saith the Spirit, that they may rest from their labours; and their works do follow them.

Psalm 116:15
Precious in the sight of the LORD is the death of his saints.

The services for Reba have not yet been added. Please sign up below to be notified when the services are ready.

The attached photos are added to the memorial of Reba Mae Calvert to help share their legacy.

Thank you for sharing your memory of Reba