Jeffrey Stephen Smith of Sarasota, Florida, died at home on April 6 after a nine-month battle with cancer. He was 69. Jeff was a world traveler and seafarer who followed the sun - in addition to his home in Sarasota most recently, he lived for many years in the Virgin Islands, California, and Kauai.

Jeff was the eldest child of Paul and Virginia Smith, formerly of Glastonbury, Connecticut. He graduated from Glastonbury High School in 1970. After a year at Goddard College in Vermont, Jeff left New England and began a long and varied career as a solar energy entrepreneur, painting contractor, property manager, theater set designer, sailor, writer, cartoonist, and canvas painter. A born storyteller with an irresistible sense of humor, Jeff was also an avid follower of local history and genealogy, and an advocate for people experiencing homelessness.

In addition to a wide circle of friends and neighbors in Sarasota and St. John, Jeff is survived by his sister Jennifer Smith and her son Gabriel Tetrev; his sister Polly Smith and brother-in-law John Boyle, and their children, Jack Boyle and Quinn Jeffrey Boyle, all of Oak Park, Illinois. His constant canine companion, Reggie, was one of several dogs that shared Jeff's later years, including Happy and Chuck.

Family and friends wishing to honor Jeff's memory are encouraged to make a donation to the Humane Society of their choice.

Who wears an ascot in the late 1960's? Jeff Smith that WHO! With a whimsical smile and a thespian spirit he brightened all of our days at GHS. Jeffs passing is indeed very sad, but lets keep his impish spirit and adventurous spirits in ourselves til we too pass from this Earth!

If Jeff ever took the time to write down some of his yarns, he would renowned as one of the great authors of his generation. We acted in plays together in high school, and at one time I tried to direct him in the one-act play, "Crawling Arnold," by Jules Feiffer. This was an impossible task. Jeff played it as he saw it, but I think the audience was entertained either way. I so enjoyed seeing Jeff at our 25th Class Reunion, to which he wore a bright yellow sport jacket that he'd borrowed from a production of Willie Wonka and the Chocolate Factory. I was hoping to see him at this year's twice-postponed 50th Reunion. Guess I'll have to wait to see him again on Fiddler's Green. Bon Voyage, my friend. You will always have a place in my heart. -- Rob Hale

I'm very sad to hear of Jeff's passing and offer my sincere condolences to his family.
Jeff and I became friends at GHS and kept in touch for a long time. I visited him at Goddard College and he visited me in Boston and Chicago, where we experienced an unforgettable 8pm-4am Blues crawl together 30 years ago.
Jeff was smart, witty and mischievous! I hoped to see him once again and shall take comfort in my best memories of him.
Aloha Jeff.
Richard Duggan
Kaneohe, HI

My condolences to the Smith family. Jeff was a good friend and classmate growing up in Glastonbury Connecticut (GHS Class of 1970). He was an “individual”. . . talented. . . funny. . a great friend. He will be sorely missed by all of his GHS friends and classmates.

Our deepest condolence to the Smith family and friends from Kay Waites at Sound Choice Cremation. 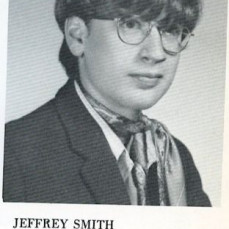 The services for Jeffrey have not yet been added. Please sign up below to be notified when the services are ready.

The attached photos are added to the memorial of Jeffrey Stephen Smith to help share their legacy.

Thank you for sharing your memory of Jeffrey